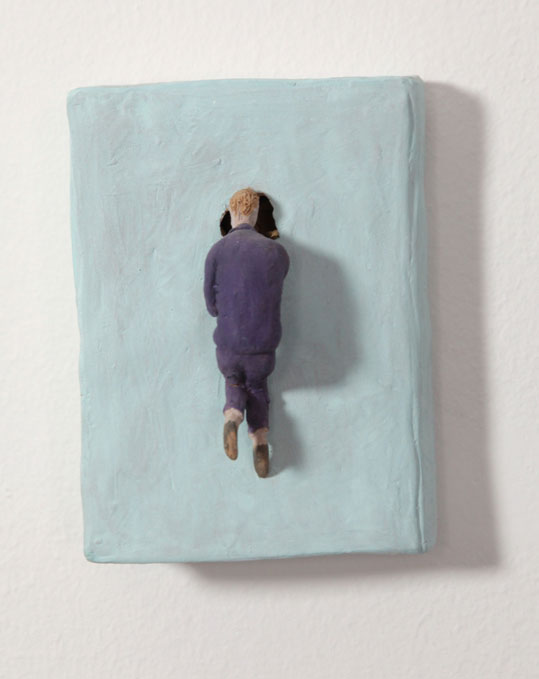 In Pino Deodato’s works the world looks like a territory of disclosures, an epiphanic place that man watches not just optically, with a surprised look, but also cerebrally. The man who thinks and watches, reads and writes, and constantly wonders about the innate essence of phenomena, about the ultimate substance of creation, is the protagonist of Deodato’s imagined journeys. He is a man folded in on himself, as if engaged in chasing the thread of a thought or unravelling the tangle of a dream; sometimes taking part in human affairs, constantly in search of utopian pacification through natural forms.

This man is a secular variation of St. Thomas the apostle, who embodies the skeptical spirit that anticipates any change, the doubt that precedes any dismay. St. Thomas is a two-faced figure, who embodies the effigy of suspicion, one who just believes facts based on evidence, as well as the image of the missionary inflamed by faith, evangelizer of Syria, Mesopotamia and South Western India. Yet Deodato’s St. Thomas is something more, the epitome of art and poetry becoming one. His doubts are those of the artist, who is metaphorically suspended one step away from the brink, maybe waiting for a sign, a revelation. Wonder and astonishment become the viaticum for a definitive choice, because in order to launch into space one must first accept the mission, be it even in the prosaic sense of art.

Deodato is a humanist, a picture alchemist, always tirelessly in transit between painting and sculpture, in-between drawing and installation, but also in-between concept and emotion. He was born 1950 in Nao di Jonadi in Vibo Valentia, Italy. After earning a diploma in the arts, he moved to Milan in 1967 to study at the Brera Academy. Exhibitions of his work have been held at the Musèe D’Art Moderne in Paris, Musèe du Luxembourg, Quadriennale d’Arte Nazionale in Rome, Murat Castle in Pizzo Calabro and the Gagliardi Palace in Vibo Valentia, amongst others. Notable commissions include the Coni, Foro Italico in Rome, the Paolo Pini Museum in Milan, for the Manifesto d’artista by the city of Turin and more.

Exhibition is ongoing until 20s of February, 2016