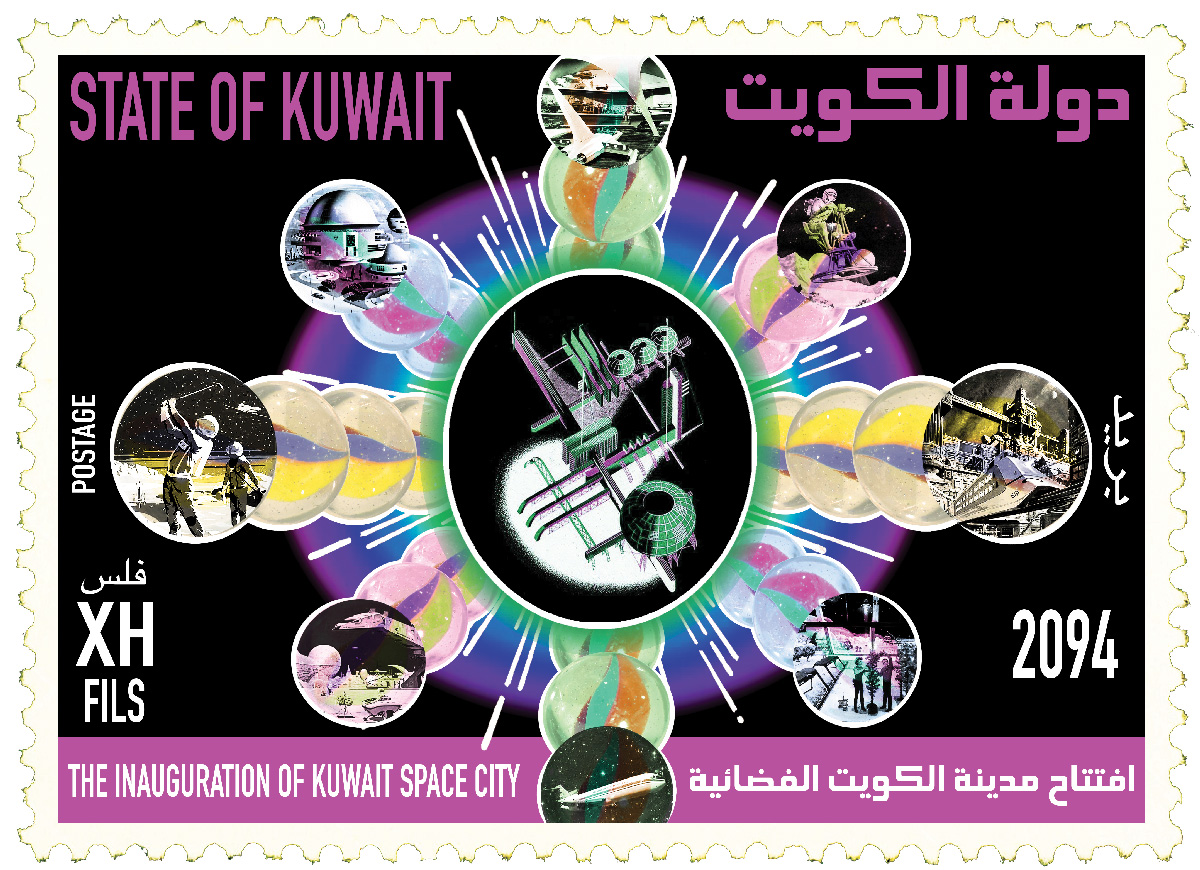 The Sultan Gallery presents the second solo show of Kuwaiti visual artist Aseel AlYaqoub during the national month of February. Bringing together almost two years of research revolving around Kuwait’s postage stamps, Culture Fair focuses on AlYaqoub’s dialogue with the nation’s use of imagery and events during the Golden Era (circa 1940-1980) in particular. Known for her politically satire works of art, Aseel AlYaqoub explores various histories of Kuwait’s past and how it emerges into the present. Using nostalgia as an instrument for critical thought, rather than longing for the past, allows AlYaqoub to investigate the invention and reinvention of heritage and tradition.

In the process of collecting Kuwaiti postage stamps, AlYaqoub probes at the visually subdued and discreet nature of the propaganda exhibited. As it was once widely circulated, the postage stamp does not usually have an obvious message which in turn enhances its peculiar effectiveness. The stamp itself was ideal propaganda. It went from hand to hand and town to town; it reached the farthest corners and provinces of a country and even the farthest countries of the world. It was and may still be a symbol of the nation from which the stamp is mailed, a vivid expression of that country’s culture, civilization and of its ideas and ideals.

The exhibition is categorized into three modules of time. In Yesterday, AlYaqoub reconfigures the narratives of old stamps by dissecting and reassembling the layers, destroying the national artefact and image with her own narrative. They are displayed as museum or cultural relics usually found in world fairs. The magnifying domes expand the seamless collages to emphasize on the continuity of history. In Palace of Justice, a dinosaur holding a large sword roams the green fields of the judicial building. Its presence suggests somewhat of a pre-historic nature in the system. A Kuwaiti man stands in the forefront with white paint on his raised hands, as though to claim his innocence.

In Today, AlYaqoub proposes three concepts for postage stamps that present vignettes of Kuwait’s current culture and external politics. Inspired from an old stamp celebrating ‘Traffic Day’, Entrepreneurial Day appropriates Edward Hopper’s Nighthawks diner and resituates it into a popular area in the city of Kuwait. The originally quiet diner is packed with young familiar faces indulging in selfies, burgers and coffee. It is a private soft-opening, exclusive and elite. Due to its obscure location, the street is empty apart from an immigrant worker sweeping in the background and a couple waiting to be seated. AlYaqoub pokes at today’s ever-growing support for entrepreneurship, their exclusivity and temporary lifespans.

Tomorrow presents proposals for the future and expresses attitudes of tradition and cultural appropriation that will follow us all the way into space. Architectural Fantasies is a nod towards Russian constructivist architect Yakov Chernikhov. In the centre of the stamp is one of his designs for a future city that carries similar spheres to those on the Kuwait Towers. The architectural regional race to building cities on islands and arid deserts continues outwards into space, presenting the citizens with hope and aspiration.

The six scenarios are in and of themselves collages inspired from the visual language of the original Kuwaiti stamps. Through the process of screen printing they are presented in the same four-colour printing format used to manufacture stamps. Alongside the artwork is a projected video of AlYaqoub’s thought process. In it she digitally records the slicing and reconfiguration of the stamps to involve the viewer in her decision making. The original stamps are presented, prior to their destruction, as evidence of their existence.

Exhibition is 0ngoing until 23rd February 2018